skip to Main Content
“I still wonder, what would have happened to the eight year old brother if he had been seen and treated by the ECPs in an emergency department instead of being sent to the ward?”
Written by: Omeed Saghafi MD, GECC Volunteer

Last week, we had an unsettling and unfortunate case that still haunts me. The case demonstrated the value of GECC, the ECPs, and emergency care. As I walked past the front door to the hospital on my way to the ED there was a large crowd of people. Most were crying loudly and trying to comfort one another.

It was still early in the morning and the ED was empty and quiet. The doors of the ED were pushed open. There was a flurry of activity and noise as a teenage girl was carried in and placed onto a stretcher. She was moaning and minimally responsive. The ECPs and students got to work like a well-oiled machine: ABCs, vitals, IVs, fluids, malaria smear, antibiotics, repeat.

Four small children appeared and sat in a line on a bench in the ED. Some looked fine, others were pale and could barely sit up straight without slumping over. A large, frantic family accompanied the children: grandmother, grandfather, aunts and uncles. The empty and quiet ED was suddenly packed.

I started asking questions in slow, deliberate, single-word English with broad hand movements and facial expressions hoping someone would understand. “How, can, we, help?” “What, is, wrong?”

“Poison.” Yes! Someone spoke English. “The boy is dead. We need to find out the poison.” 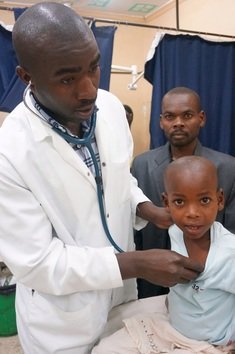 The English was less than helpful. Ok, someone was dead, and maybe there was poison involved. Maybe all of these children drank said poison. Maybe “the boy is dead” was a common Ugandan metaphor. I realized I was getting nowhere and asked an ECP to see the patients and sort out what was going on, and a nurse to start taking vital signs.

Apparently, two days previously, the eight-year old boy in the family had nausea, vomiting, diarrhea, and fever. He was brought to the hospital in the morning, just before the ED was open for the day (unfortunately the Nyakibale ED is only open from 8am until 2am). As is the case for such patients, he was sent to the ward where he waited and died before treatments could be initiated.

But then his older sister developed the same symptoms, as did every other child in the family. The family was concerned the kids may have gotten into some sort of poison. Now they were all sitting in front of me on a bench and the older sister was minimally responsive on a stretcher. All I could think was, please don’t all die.

Obviously, this was not a poison. They all had a fever and most poisons do not give you a fever. But this could have been any sort of infectious disease, including the one no doctor ever wants to be the first to diagnose: Ebola.

They did not have Ebola. They probably had typhoid. They were all aggressively rehydrated and given antibiotics to cover the bacteria that would cause their symptoms.

They all improved rapidly and left the hospital well. Their mother developed similar symptoms later that day except she had constipation and a headache, which essentially synched the diagnosis since adults with typhoid get constipation and headache while children can get diarrhea. She also recovered well.

I still wonder, what would have happened to the eight year old brother if he had been seen and treated by the ECPs in an emergency department instead of being sent to the ward?

Make Sure You Ask For An ECP

Malaria is in the Air

Written by: Omeed Saghafi MD, GECC Volunteer "You can call it a miracle, but it’s…