Surprisingly, this discourse occurred more than once while I was volunteering and teaching in Nyakibale with GECC. First, “prayer” was not exactly covered in either medical school or residency. Second, I’m not a deeply religious person. So what did I do?

I prayed. Of course I prayed. I also lost a lot of sleep. Hours were spent laying awake in a small bed thousands of miles from home, enshrouded by a mosquito net, staring at the white lizards on the walls, mesmerized by the loud hum of crickets, and occasionally brought back to reality by the shrieking of a flock of remarkably ugly and loud Ugandan birds I still haven’t learned to name after a month. At the end of the day, when I teach medicine, I ask myself, “Would I want these students caring for me or the people I love?“ When prayer is the only option left, a lot of sleep is lost trying to decide the answer to that question. 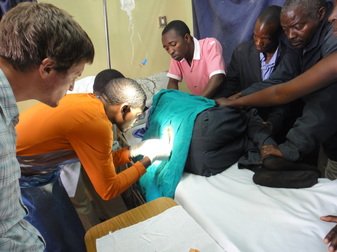 My first night in Nyakibale, I had just arrived after a tedious bus ride and decided to stop in the Emergency Department. A previously healthy 64-year old man was dropped off. He was unresponsive. He had been treated with antimalarials, but the oral medications he had been taking were not strong enough to fight the malaria. By the time he got to Nyakibale he had a high fever, was breathing rapidly, and was gurgling, as he was not conscious enough to swallow properly. In the US, this patient would have been intubated and connected to a ventilator. But there was no available ventilator. There wasn’t even an automatic suction device to help clear out the secretions in the back of his throat. This man was walking, talking, hugging family members a week ago, but now, in my mind, he had no hope of survival.
A few days later, a pregnant woman was hit in the head with a rock and started seizing. A day after that, a little boy fell off a motorcycle. He was confused and the left side of his face was paralyzed. He had an exam and history that belonged in medical textbook under the heading “epidural hematoma,” a type of brain bleed that invariably leads to death.

A 4 year-old girl was dropped off. She was blue, limp, breathing 70 times a minute, and her oxygen level couldn’t be measured because it was nonexistent. A look at her fingernails revealed the problem: the nails were thickened and curved into a form known as “clubbing.” She likely had a congenital heart, lung, or blood disease and had been living with low oxygen levels her whole life. Her mother was nowhere to be found to tell us her history because her mother had to work in the village miles away. Luckily, I was told, there was an “attendant” who brought her and might know more. She had a loud heart murmur, her issue was likely cardiac in etiology. She was placed on high flow oxygen and we could finally measure her oxygen saturation: it was 35%. Where was the knowledgeable attendant?! He finally showed up. He was seven years old. He was less than helpful.

Four small children appeared and sat in a line on a bench in the ED. Some looked fine, others were pale and could barely sit up straight without slumping over. A large, frantic family accompanied the children: grandmother, grandfather, aunts and uncles. A 8 year-old boy in the family had died just a few hours ago. Now the whole family was sick. They were certain it must have been poison. It was probably Typhoid. But in the third world, Typhoid can be as deadly as poison. 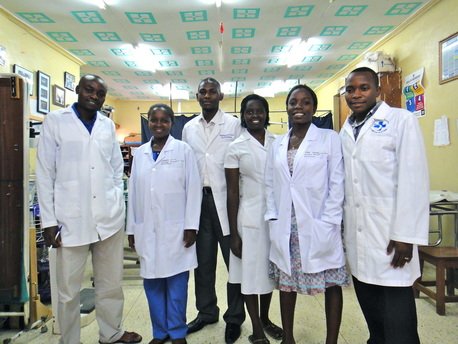 A twenty-five year old woman came to the ED with vomiting. The students treated her for the most common causes of vomiting. However, her heart rate was close to 200. A heart rate of 200 was not consistent with vomiting or dehydration. I felt proud of myself for making this discovery and finding a teachable moment. I taught the students to recognize this medical discrepancy. We performed an ekg and I taught them about the patient’s actual problem, which was supraventricular tachycardia (SVT), an abnormal heart rhythm that is easily treatable with a single medication. One problem: this medication does not exist in rural Uganda. There are some “maneuvers” that sometimes work for fixing the problem; we had her “bear down” and push like she was having a bowel movement, we put ice on her face, we massaged her carotid artery. We failed. As her blood pressure dropped and the fast heart rate made it so not enough blood could get to her brain, I considered a last ditch effort, we could use a defibrillator and shock her. You know, like in the movies, with paddles and everything. Except there was another problem: the hospital didn’t have a defibrillator
“She is going to die.”
“She is not going to die, she is a strong African, and we will pray for her.”
I prayed. I lost sleep. What was I doing there if I couldn’t leave feeling like I would be comfortable if I, my mother, my future children were to get sick on the doorsteps of Nyakibale?

None of these patients died. In fact they all got better and left the hospital walking on their own two feet. While I would like to imagine it was my prayers that did it. Or because they were “strong Africans,” this is not the reason these patients survived. The patients all survived because the ECPs and ECP students provided excellent and rapid emergency care. 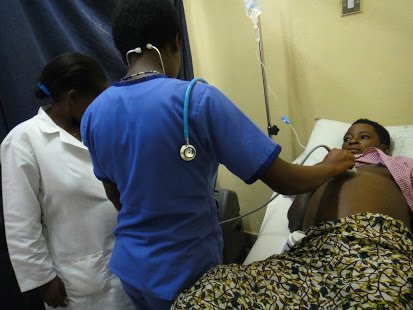 Even though very little could be done for these patients, the small but very important amount that could be done was done and was done rapidly. The 64-year old man with multiorgan failure and cerebral malaria was suctioned with a manual suction device, received intravenous antibiotics, antimalarials, and fluids within minutes. In most of Uganda he would have sat on a ward for at least 24 hours before receiving this care and he probably would have died.

The seizing pregnant trauma patient received medications for her seizure and she was maintained on seizure precautions to avoid aspiration and any complications from a seizure. She improved.

The boy with a likely epidural hemorrhage survived. He wasn’t necessarily a strong African, but he was indeed an incredibly lucky African. He was a miracle.

The little girl with congenital heart disease improved. She had decompensated because she had developed pneumonia and was dehydrated. She received prompt oxygen, fluids, and antibiotics. Two days later I visited her on the hospital ward. She was sitting up in bed drinking juice. She smiled at me and offered to share her lunch. I gave her a hug.

The family with Typhoid received rapid antibiotics and intravenous rehydration. While their 8-year old son/sibling who never had the chance to receive emergency care did not survive, all of the family members seen by the ECPs and ECP students left the hospital two days later.

Finally, the 25 year-old with a heart arrhythmia did not get the medication that is readily available in America. But, having made the appropriate diagnosis, we were able to call five different local pharmacies and find a different medication that is essentially the fourth line of therapy for her condition. Her family could only afford six doses. After the third dose, her heart started beating normally again.

When I look back at these cases and countless others just like them, I can’t help but think back to the original question that kept me up at night. If I were to get sick anywhere in Uganda, I would want it to be in Nyakibale, and I would want the ECPs to care for me. In America, we often get caught up in the smallest intricacies of advanced medicine. However, what these cases taught me is that what really matters is the basic but rapid emergency care provided by the ECPs. The resources in Uganda are limited, and yet the ECPs were able to use basic emergency medicine to save lives and make it look easy. If you get sick in Uganda, make sure you ask for an ECP.

Malaria is in the Air

Written by: Omeed Saghafi MD, GECC Volunteer "You can call it a miracle, but it’s…

Typhoid is in the water

"I still wonder, what would have happened to the eight year old brother if he…