skip to Main Content
Written by: Omeed Saghafi MD, GECC Volunteer
“You can call it a miracle, but it’s not a miracle. It is what happens when you take excellent care of patients rapidly and efficiently and have the proper tools to help you do so.”
Every other patient seen at Nyakibale seems to 1) have malaria (in reality 29.5%), and  2) be on the verge of death. It seems malaria is the ultimate equalizer here. It does not discriminate. Women, men, young, old, pregnant, everyone gets malaria. By the time they get to the ED, it is because they have severe malaria that is often failing outpatient treatment. They are minimally responsive, staring off into space, and dragged out of a car by family and friends onto a stretcher. Their blood pressure (taken with the MDF Instruments blood pressure cuff) shows that their blood pressure is far too low to be compatible with life for much longer. They are in shock and in an effort to keep blood and oxygen going to the body’s organs, these patient’s bodies compensate by increasing the heart rate to twice normal, and increasing breathing to 30-40 times a minute. 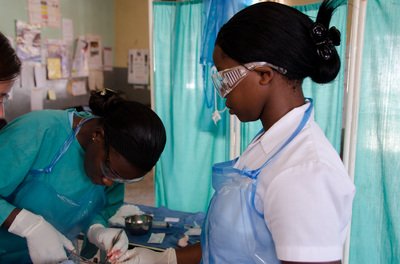 It was Halloween back home and I couldn’t help but walk into the ED feeling a bit homesick. I was missing out on one of my favorite holidays – excited kids running around in costumes, the crisp fall air, the colorful trees, and of course, the fun parties with friends and family. The feeling was gone within a second of walking into the ED. Even in the United States, the ED was a home away from home for me. As I walked into the Nyakibale ED, I knew I was where I belonged.

Every seat and bed was full. The patients kept coming. Children were crying; family members kept coming in an out. In one corner, a patient was being treated for cow tick poison ingestion. In another corner, a patient was having a complex laceration repaired. To anyone who does not know the concept of triage and emergency medicine it would have seemed like chaos. But the chaos was organized. The Nyakibale ED had only six stretchers, but unlimited seats. Each time a new patient arrived, the patients would be rearranged. Those who could walk would be asked to move from stretchers to seats, stretchers would be pushed around so that the sickest patients were on stretchers near the single oxygen supply in the department, moderately sick patients had their stretchers moved towards the side wall, and treated patients were sent home or moved to the wards, so a stretcher could be freed. 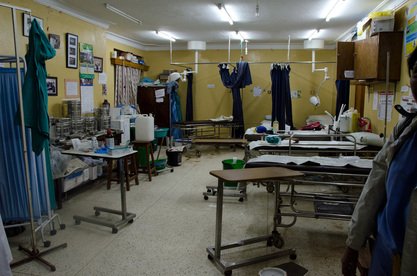 It was among this organized chaos of a weekend night that a previously healthy 64-year old man was dropped off, nearly unresponsive. He had been treated with anti-malarials, but the oral medications he had been taking were not strong enough to fight the malaria. By the time he got to Nyakibale he had a high fever, was breathing rapidly, and was gurgling, as he was not conscious enough to swallow properly. In the US, this patient would have been intubated and connected to a ventilator. But, there was no available ventilator. There wasn’t even an automatic suction device to help clear out the secretions in the back of his throat. This man was walking, talking, hugging family members a week ago, but now, in my mind, he had no hope of survival. The ECPs and ECP students were set on proving me wrong.

The patient was placed on oxygen. He had an oral airway placed to keep his tongue from blocking air entry into his lungs. A manually hand-pumped suction was used to clear out his secretions. The new MDF instruments blood pressure cuff was brought out; the blood pressure was hard to get but it was 80/40; the patient was clearly in shock and would need treatment rapidly. His oxygen saturation was less than 70%. Baniga, the junior ECP student, worked proudly using his new MDF stethoscope to find there were crackles heard throughout the patient’s lungs. As we rapidly discussed, the crackles were possibly a pneumonia, or worst case scenario ARDS (acute respiratory distress syndrome, one of the worst complications of severe malaria, when the lungs are flooded with fluid and without diligent care the patient effectively drowns in his own lung’s fluid).

The patient needed intravenous medications. Two IVs were established by the skilled ECPs within seconds, a malaria smear was sent which showed many malaria parasites. His complete blood count (CBC) found him to be remarkably anemic from the malaria. The patient was given intravenous fluid and blood. His lungs may have been full of fluid but he was also not perfusing his vital organs so he needed hydration. He was given artesunate (an intravenous antimalarial medication) and antibiotics. He was monitored and watched closely. 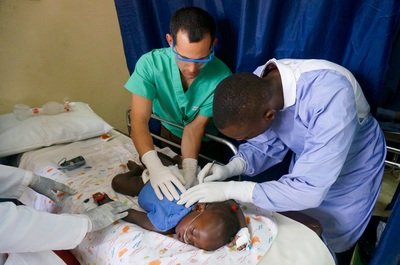 In the U.S., this patient would have continuous electronic monitoring, x-rays, and a plethora of laboratory tests to monitor his resuscitation. In rural Uganda, there were no timely x-rays, and lab tests other than a CBC and malaria smear were not standard. There was a small handheld oxygen monitor, a blood pressure cuff, and a stethoscope. These were the tools used to constantly monitor the patient. His heart rate, breathing, and blood pressure began to improve. Listening carefully to his lungs after every small bit of fluid to make certain they were not being flooded even more than they already were, his crackles did not improve, but they did not worsen either. Only when he had improved, was he transitioned over to the medical ward.
Without GECC and the ECPs, I honestly believe this patient would have died if he had to sit waiting more than a few minutes to have his treatment started. Without the ability to rapidly and repeatedly measure his blood pressure, take his vital signs, and listen to his lungs to determine the best course of action, he could not have been treated very effectively in a system already strained for even the most basic of resources.Instead, this patient is now alive. He is walking, talking, and he is with his family. You can call it a miracle, but it’s not a miracle. It is what happens when you take excellent care of patients rapidly and efficiently and have the proper tools to help you do so.

Editorial note: GECC is profoundly grateful to MDF Instruments for donating stethoscopes and blood pressure cuffs to the Emergency Department at Nyakibale Hospital

Make Sure You Ask For An ECP

Typhoid is in the water

"I still wonder, what would have happened to the eight year old brother if he…