skip to Main Content
I am just returning from a trip to East Africa that included a brief stay at our pilot site at Nyakibale Hospital. Having spent the past eight years working to develop sustainable emergency programs in Africa, I sometimes feel things progress mpora mpora (slowly, slowly in the local language in western Uganda). This trip was unique because it allowed me to reflect on the evolution of our work and put things into perspective for me. Our Emergency Care Practitioner (ECP) program is now training its fourth class and the Emergency Department is a well-established part of the hospital (it even made it onto the hospital roadside sign!). 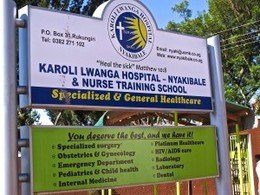 I thought back to how things were on my early trips here and coincidentally, we had several parallel cases with quite different outcomes. On my original trip in 2005 (four years before our training program started), a mother was referred to see the surgeon after losing her term infant. She had lower abdominal pain 6 days after delivery. She had been at the hospital for days without a diagnosis before she was sent to the surgeon for his opinion. She had obvious need for an operation due to an infection she had within her abdomen and pelvis. When the surgeon operated, he found that her entire uterus had been destroyed from an untreated infection that was ultimately due to part of the placenta being left behind after delivery. Despite a prolonged operation, great care after the operation, and powerful antibiotics, this young mother ultimately died. 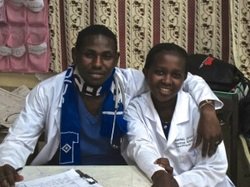 This week, I watched as Jovita, a qualified ECP, evaluated a patient brought in with a recent miscarriage. The woman had lower abdominal pain for one day. Jovita examined her and immediately realized she had an infection. She performed an ultrasound that confirmed her suspicion – retained products from the pregnancy were slowly becoming infected. Jovita started antibiotics immediately and the patient had the products removed the following morning before the infection damaged her internal organs or spread throughout her system. This young woman left the hospital and was doing well on follow up.

Back in 2006, I remember seeing a patient on the ward who had arrived the night before with an open fracture (i.e. the bone was sticking out) of his lower leg. This injury has a very high risk for infection and the longer one delays washing it out and giving antibiotics, the higher the risk of infection. In the 12 hours he had been at the hospital, he had a dry gauze dressing placed over the wound and was given a dose of Tylenol. He received no emergency care.

On the second night of my recent visit, I walked into the ED to find Hilary, our Education Director and newly qualified ECP, applying a splint. When I asked what happened to the young woman, he said – “open fracture, Doctor. We washed it out under pethidine [strong pain medication], closed the wound, and gave antibiotics. I am just splinting her so she can recover from the ward.” The patient appeared to have adequate pain control as Hilary applied the splint. I looked around and saw that Hilary provided quality care for the patient with other hospital staff without any physician interaction. I’m proud to see the growth of Nyakibale’s ECPs providing life saving care to a very needy population, and to see the significant impacts GECC’s emergency care training program is having on the health outcomes of the local patient population.

On behalf of the Board of Directors, I am pleased to bring you the 2017…

REPORT FROM THE FIELD

"What we know of health care in the U.S. is nonexistent here. The ECP’s must…

By: Dr. Mark Bisanzo, GECC Co-Founder, Director of Programs As the summer of 2015 draws…