“I have been able to share my knowledge with different health workers from other countries, and ultimately earn a living doing something I am passionate about.”

​Natukunda Elizabeth had been an ECP for 8 years. She is from the town of Rukungiri and has one daughter. Being an ECP has allowed her to handle several emergencies on her own, something that she was not used to doing before. She has also had the opportunity to teach junior ECP’s. Elizabeth finds her job as an ECP incredibly rewarding because patients appreciate what she does for them. She is able to see patients leave the hospital after being treated. Elizabeth has also gotten the chance to do procedures that would be done by doctors and identify surgical cases using an ultrasound scan. 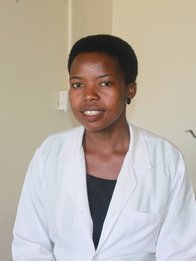 Elizabeth’s most memorable case was a 25-year old man who came into the ER after being hit by a motorcycle. When arriving at the ER, he was responsive with were no signs of visible bleeding. After performing an initial examination, the patient was given pain medication and sutures were started.  During suturing, the man began seriously convulsing and was given medication immediately. The patient stabilized, and after performing vitals again, his sutures were finished. This taught Elizabeth to take trauma patients seriously and look past superficial injuries. She learned how essential patient monitoring and several consecutive examinations are in trauma cases.

Elizabeth stressed several reasons how being an ECP has changed her life. She is now more confident in saving lives after acquiring more knowledge and improving on her skills. She also thoroughly enjoys teaching others and working in a team setting. Elizabeth has been able to share her knowledge with different health workers from other countries, and ultimately earn a living doing something she is passionate about. She is empowered by the fact that she is now able to interpret x-rays, teach nurses, handle several emergencies, and perform FAST exams as an ECP. Elizabeth no longer has to wait for doctor in order to save a life.

Give now and DOUBLE your impact! Your gift will directly train 10 new ECPs, like Elizabeth, who save lives everyday!

“If you have come here to help me, you are wasting your time.  But if…

"​Despite the limitations, the ECPs managed to provide efficient and often life-saving care to patients…